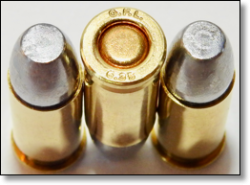 For well over two decades (today's date is 09-21-22), customers have been requesting the development of 25 ACP ammunition that will actually kill humans. We now have it available.

Load #1 (item 25ACP 60 HC FN) features a 60gr. hard cast flat-nosed bullet that is moving at 850 fps out of these test pistols. In our testing, it appears that this bullet will travel entirely through a 200 lb. man that is frontally shot in the chest. This is lethal.

I have fired many major brands of 25 ACP ammo featuring a 50 gr. FMJ-RN bullet, and they normally do not exceed 700 fps—very anemic performance.

The below pistols give real-world velocities, not hyped-up laboratory test barrel velocities that you’ll never see in real use on the streets.

Here are the velocities for item 25ACP 60 HC FN

These two loads are within SAAMI pressure specs and can be fired in any all-steel pistol that is in ordinary firing condition.

You should always test these small pistols for cycling reliability with your chosen load BEFORE you rely on the ammo to save anyone’s life. The 60 gr. load functioned flawlessly in the Beretta, Seecamp, and Colt pistol, but will fail to feed occasionally in the Browning. The 50 gr. load functions reliably in all four test guns.

There is no appreciable muzzle flash with a cartridge this small.

Functions flawlessly in our Colt Junior and Astra Firecat. Chrono results say it's even faster than advertised. We're very pleased.