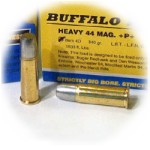 This new load is designed ONLY for certain firearms. They are as follows; Ruger Red Hawk, Ruger Super Red Hawk (the Ruger Alaskan is a short barrel Super Redhawk), Ruger Super Blackhawk or Vaquero, Freedom Arms Model 83, Taurus Raging Bull All Steel Versions (no lightweight alloys), Colt Anaconda, Magnum Research BFR Dan Wesson Revolvers. Suitable rifles include T/C Encore, CVA Hunter, Handi Rifle and any rifle with a falling block action.  Please note that this website list of approved firearms is more up to date than some of the lists found on our boxes of ammo.

We get hundreds of emails asking if this load can be fired in S&W revolvers or some firearm other than what is in the above list. The answer is NO. The above list is all-inclusive. If some shooters continue to use this product irresponsibly, we may have to discontinue it, and that would be unfortunate as it is our best selling 44 mag. Load, and it gives excellent performance for those that use it responsibly; however, as is always the case, irresponsible use of any product ends up penalizing responsible users. It would also be wise to read our “Technical Article” on “Dangerous Pure Lead Cowboy Bullets”, before using this (ITEM 4D) product.

This load brings a level of power to the 44 Mag. that has never before been known.

The below velocities with over the counter firearms tell the story. 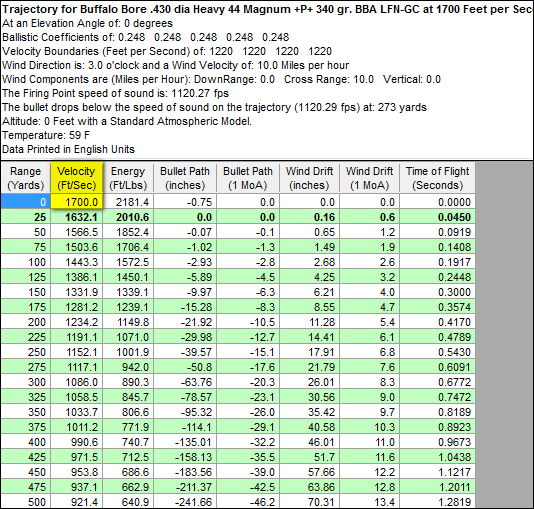 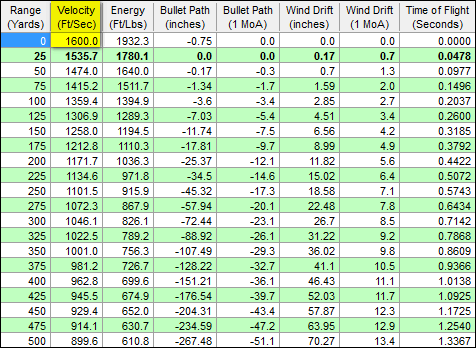 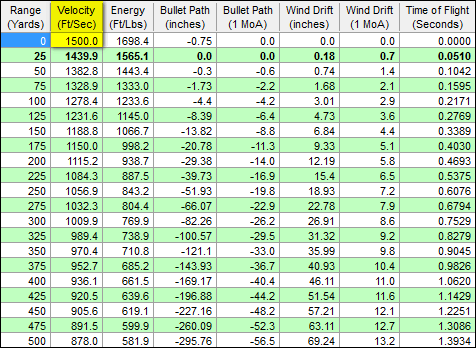 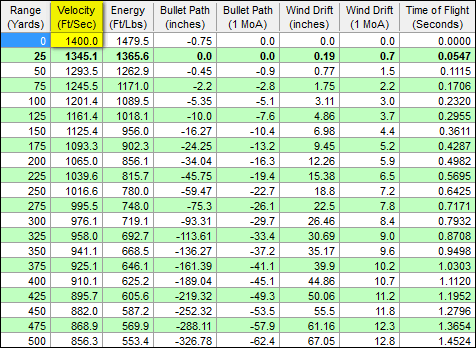 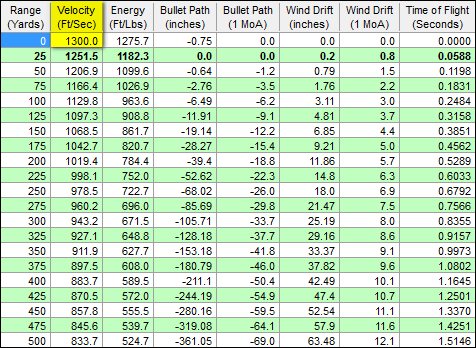 Very impressive! I bought both this and Underwood's same 340gr P rated bullet for my 44 magnum. The recoil felt slightly snappier for buffalo bore. I chronographed five random rounds from both brands and from my 5.5" Ruger Redhawk, I found an average speed of 1,240fps (1,161ft/lbs) for Underwood and 1,300fps (1,276ft/lbs) for Buffalo Bore. Standard deviations were the same, but buffalo bore was consistently giving 60fps more from the same advertised ammo. I posted a YouTube review here (https://youtu.be/lenFOT_TKLw). I love this stuff and will be bringing it on every hike out West I take in the future.
Paul Lennon on 05/26/2018 10:54am

I AM IMPRESSED with this load's unmatched power and incredible accuracy! I purchased 2 boxes of this 340 gr. LHC P load this week, to try in my single shot CVA Hunter in .44 Mag, with its 22" bbl. and 1 in 20" twist rifling. I bought it primarily as a 'camp gun' and wanted the heaviest practical, and most accurate, dedicated 'bear load' for family-protection (along with our bear spray) should a threatening grizzly show up at our camp.

While the recoil must be a "bear" in even heavy revolvers, it's really negligible (almost a 'pussy-cat' in comparison to ANY handguns) in my small 6.5 lb. scoped-CVA rifle. This rifle's rifling also truly likes this Buffalo Bore<br 'heavy-bullet' load as my 5 shot group at 50 yds. (from a bench-rest) shot into 5/8"!!

So, I fully endorse both of these Buffalo Bore loads (especially the heavy HC 340 gr. bullet load for bears) and I also suggest to anyone looking for a great little carbine in the .44 Mag. which might be used for bears (and who are 'recoil-shy' when it comes to heavy-caliber bear-loads in revolvers!), to seriously consider this Buffalo Bore load & CVA 'Hunter' rifle combo'!

First encountered this from a friend who brought some to the range. I usually shoot 240gr jhps in my Ruger SBH. I loaded a cylinder with these, noted they almost come to the end of the chamber in the cylinder. Being used to the 240gr 44mag, I had no idea what to expect. There was a lotta recoil compared to .44mag 240 gr, no holding this one down! Glad my 7.5 SBH weighs 3lbs. Would not want to shoot this out of a lighter 44. Accurate and powerful, would carry in bear country.
James on 12/09/2012 09:03am

Like shooting a cannon in your hands. This is a load for people that want the ballistics of a .454 casull without having to actually buy the weapon itself. I had a super redhawk, and recoil was "stout" with these loads. If you want to hunt with this ammo, you are going to need to put some time in at the range if you aren't used to this level of recoil. I should mention I got a lot of "WTF was that" faces at the range when I shot these too. Always entertaining!
Larry Allen on 12/13/2011 02:06pm

I have come to an honest conclusion about these heavy p .44 mag. loads.
They are superior to standard factory .454 Casull loads!!
I fire them in my Ruger super Redhawk Alaskan 2.5 inch.
Buffalo Bore .454 casull are obviously superior, but where can you buy the most powerful .44 magnum round anywhere else in the world? you can't! Only Buffalo Bore sells the most powerful .44 mag.round in the world!
I am beyond impressed.

Fired my first rounds from a ruger redhawk 5.5 from 30 yards in a kneeling position.
Heavy recoil, but very manageable.
bulls eye on target, i am impressed.
this will be a great deer round, and possibly moose at close range.
highly recommended to all handgun hunters!!
Keith Gravois on 08/18/2010 08:08am

Incredible round for the .44 magnum!! I have a ruger super blackhawk 4 5/8 barrel and found this round to be very accurate and had no problems with extraction. The recoil is stout, but manageable ( even had my 120lb girlfriend shoot it with no problem) If you are looking for a reliable round with plenty of power look no further!!
David Anderson on 05/29/2010 03:33am

I shoot these from my 9.5" Ruger Super Redhawk. Yet to kill a critter with it, but am headed to Maine for a Black Bear hunt, and will give the review then. All I can say now is that these come out fast, and print nice groups iron sights, at 25 yards.
Tyler Masters on 12/27/2009 03:30pm

Have used extensively in Ruger super red hawk. Only using on big whitetails in Iowa, but puts them down fast. Dont need this much power for deer but allows me to get extended range. Had a wounded deer from another hunter running at 150 plus yards, fired the shot quartering away, got lucky shot and put deer down instantly, awsome round, you wont be disapointed.