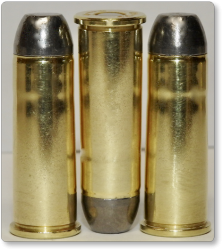 For nearly two decades, as of this writing, (12-20-17) our customers have been requesting some full power 44-40 loads. Because of the antiquity of this cartridge (It was first developed as a black powder only cartridge in the mid-1800’s), there are numerous potential issues with making modern full power loads, as I will describe below.

Original 200gr. lead (not hard cast, but lead) bullets achieved around 1,000 fps from 7.5-inch barreled revolvers of the day and 1,300+ fps from rifles. Our new loads do that and a bit more with smokeless powders while staying within the black powder pressures of 13,000 CUP as a maximum average pressure.

Back in the 1800’s, there was no way for the gun/ammo industry to standardize pressures or firearm dimensions, hence my hesitancy to produce modern ammo designed for specific firearm dimensions of today. Allow me to give you an example of just one set of dynamics that are problematic. Early Colt revolvers specified a bore diameter of .427 inch, (44 SPL and 44 Mag. utilize .429 inch bore diameters) but some of those revolvers used a chamber throat of .423-.424 inch. This was done to raise pressures with black powder and get uniform ignition and higher velocity from revolvers (this is not an issue with rifles) by forcing that soft, pure lead bullet of around .427-.428 diameter into the smaller chamber throat and forcing that chamber throat to size down the bullet………...then, when that soft bullet would hit the .427 bore, it was soft enough to “slug up” to .427, seal the bore, shoot accurately and at high velocity.  So, here’s one of the problems in making modern ammo……. if someone is negligent enough to fire modern ammo featuring HARD CAST bullets through an old revolver with such undersized chamber throats……hard cast bullets are much harder than pure lead and if you try to force a very hard bullet through a grossly undersized chamber throat, that hard bullet will not easily size down like pure lead and would, therefore, raise pressures higher than the old iron (not steel, but iron) revolvers can withstand. To avoid this type of issue, please do not shoot this modern 44-40 ammo through any revolver made before 1900. By 1900, the steel used for these revolvers, was actually steel, not iron.

But (there has to be a but) another issue is that there are many old revolvers that are in very poor shooting condition and it is risky to shoot them with any ammo……so, I’m asking each shooter to be responsible and have any questionable revolvers checked by a competent gunsmith (not all gunsmiths are very competent) before firing them with any ammo. In America, folks are quite careless and thoughtless about what they do with firearms (believe me) and then when they make a mistake and hurt themselves or others, they simply sue……. never mind that they neglected to be responsible for their actions in the first place………this is modern America, where nobody accepts responsibility for educating themselves before they start shooting or involving themselves in many activities.

Frankly, I would not fire any ammo from any firearm that was made of steel for black powder use. The 1894 Winchester, chambered in 30-30 was the very first American firearm for civilians with barrel steel designed to contain the higher pressures of smokeless powder. By 1900 most gun makers were getting on board with higher pressure cylinder and barrel steel for smokeless powder. This would be a great place to ask you to read my essay on aging firearms.

THE DANGERS OF NOT AGING YOUR FIREARM, VERSUS THE ADVENT OF“HIGH-PRESSURE STEEL” FOR USE WITH SMOKELESS POWDER

If I sound jaundiced at the irresponsible and unaccountable generation of Americans we have raised, I am. Far too many of them are still living in their single mom’s basement while in their 20’s or 30’s and all they have to do is turn 21 and they can buy a handgun and ammo and start blasting away…………when they negligently make a mistake, their mommy tells them it is not their fault, which is what she’s been doing since they were little boys. Then they go searching for an attorney. This generation of “do nothing”, wait for handouts from our government or mommy, irresponsible Americans is deeply disturbing to me. The idea of such folks buying and handling firearms is spooky at best and the idea of them buying my ammo, using it carelessly and then suing me, is always on my mind. I get daily emails from customers who demonstrate they are careless and foolish with firearms and ammo and whatever mistake they happen to make, is not their fault, just ask them! Rant over.

Accuracy with both new BBA 44-40 loads was good to excellent in all the firearms listed below.

I hope you enjoy this powerful and useful 44-40 ammo. I hope that you are responsible and thoughtful about which firearms you choose to fire it in. It will only take one irresponsible user of this ammo, to sue me for their own negligence and I will have to remove it from the market. Good shooting and God bless.

I shoot a lot of SASS matches. Since I carry 3 SAA's for matches, I wanted ammo that would work for defensive uses. I bought 3 boxes of the 185 gr hollowpoints.
They're one of the most accurate rounds I have fired.
Dan Beard on 03/09/2018 12:08pm

Shot extremely well out of a Winchester (Miroku) 1866. Love this load!