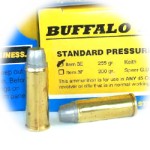 All of today's standard 45 colt loads are very anemic. Often featuring a 250 gr. Bullet at around 700 fps.

We knew that we could develop a couple standard pressure 45 colt loads that would feature a 255gr. Gas checked soft cast bullet at around 1,000 fps or a 200gr. Jacketed Hollow Point at around 1,100fps. We wanted loads that were substantially more powerful than today's weenie loads, but that could be fired in ANY 45 Colt firearm.

Both of these 45 colt loads are designed to be a heavy loading, yet be within standard (SAAMI) pressure. As such, both of these 45 colt loads are safe and recommended to be used IN ANY post-war 45 colt that is in normal working condition. ANY post-war means ANY post-war, so please take my word for it without phoning or emailing me "just to make sure". I love hearing from and appreciate customers, I really do, but there is no sense using up your or my time answering questions that have already been answered.

These loads are indeed heavy 45 Colt loadings. You can fire them in any post-war firearm that is in normal working condition chambered for 45 Colt without reservation. These loads will turn your Colt SAA or clone into a powerful carry gun. The cast load (item 3E) is gas checked and will not substantially lead your barrel.

See the below velocities. 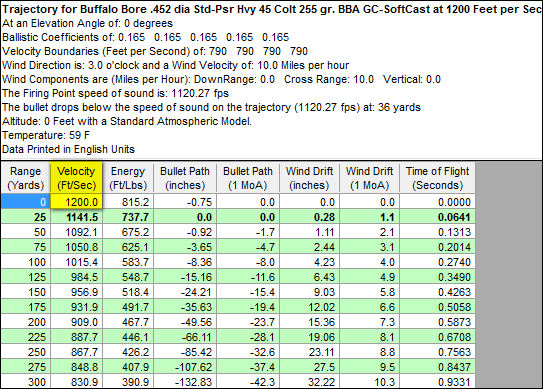 Wow! So I purchased a Uberti Cattleman II in .45LC based on the Colt 1873 SAA. I picked the pistol up at fleet farm and with the purchase they gave me a box of 50 Aguila 45 colt rounds running at 600 fps velocity and 150ft.lbs, that load is just over a half load compared to this Buffalo Bore standard load, I loaded the rounds side by side tonight firing the smaller load first and it recoiled like a .22LR, next round up was this round I bought online here and the recoil/noise was the big boy sound you expect from a .45 colt. The hard cast rounds were both fired at a metal drum I have as a backdrop for my gun range and the light cowboy action load only made a massive dent whereas the buffalo bore load made a gaping hole entering the thick steel of the barrel and exiting it making impact in the dirt. Felt comparable to my beastly .44 mag. This buffalo bore standard load makes the .45LC come back to life and increases it's capabilities tremendously as a hunting revolver, range revolver, or hefty back country self defense revolver. Thanks Buffalo Bore, I'm coming back for MORE!!
NEPA on 12/24/2020 04:29pm

My FA97 shoots them well. Never had to use them while out walking the trails but very confident in the load and my FA if needed. Of course I would still need to do my part.
CDJ on 03/11/2019 12:48pm

I have always preferred the .357-frame ("original") Ruger in 45 Colt over the heavy Super Blackhawk-based revolver but didn't have the tools or experience to develop a standard-pressure load that I would trust for medium game. This round gives you a viable factory-loaded option that will do the job.

Chrono'd @ 980ft/sec out of the 5.5in bbl w/ very small SD, it will reliably print 2"/25yd out of my box-stock piece. No pressure signs at all; cases slide right out. Minimal lead cleanup from ~75 practice rounds (I see WAY more w/ my fave Cowboy loads.)

I managed to take a near-300lb boar in TN with it. The first shot was definitely terminal but I cautiously fired a second to ensure the dogs wouldn't have a fight on their hands (paws).

I only have two data points here, but it was hands down more effective than a very hot&heavy M28 .357 load on a similar hog from a hunt several years ago that booked considerably higher KE values. First round a raking shot from the "starboard quarter", second more or less broadside, neither recovered. Clean full caliber entrance, almost 1" dia exit, lots of blood, and, as we all strive for, a quick kill. Respect the beast.

Just to note: I love modern bullets and have not been a devotee of the Keith bullet in the past but this was as good as you can get, IMO.

I wouldn't hesitate to use it hunting whitetail in the woods wherever it would be considered legal (I don't take shots past ~30yds with iron-sighted handguns anymore, so bear that in mind).

I don't think most of us could duplicate this from handloaded, hand-cast loads without a lot of development. They're worth the price.
John Alberti on 09/05/2016 12:02am

I'm a big single action fan Especially .45 Colt Everyone always saying .45 Colt is weak. This Buffalo Bore round is the answer to all who question the effectiveness of .45 Colt. Here in Texas we kill a lot of pigs and I have seen pigs run away from shots that would drop anything this side of an elephant. They are not easy to kill. It takes a brain or spine shot to drop them Even a heart shot won't drop them This round will punch through to down a good sized hog at 25-30 yards You just have do your part
JR on 10/11/2014 09:42am

Simply the best. Do you know what I like? I like a company and a product that exceeds expectations. This 45 ammo does EXACTLY what the description says. I have a flat-top, medium frame Blackhawk with 4.7" barrel. If you need more than this, you're in the wrong place at the wrong time. Good for anything in the woods. Accuracy is outstanding. With the short barrel it's less than 2" at 25 yards (leaning up against a tree)
Get some of these for ALL your 45 clones.
chris Reinecke on 09/30/2013 05:14pm

I bought some to see how it shoots in my public defender. ItIis like shooting a snub nose .357. Recoil is stout but manageable. There is no better standard pressure .45 colt round than this peroid. I can't wait to do some ballistics test with this. No doubt about it I will buy more.
Brian Jay on 11/27/2012 10:10pm

I am shooting these out of a Circuit Judge. The 18" barrel must have a very positive effect on the velocity because these things shoot very flat out to 50 yds. I took a button buck this season at 30yds. and the bullet passed through the right shoulder blade, the heart, and chipped a rib on the far side. The exit did not indicate a lot of expansion, but the combined accuracy of the firearm and the ammo makes a very persuasive argument for the efficacy of the BB .45 LC for game. I would not spend this much on target ammo, but I will always have some on hand. Good stuff!!
Matt Borland on 06/07/2012 08:55pm

I _love_ this ammo! The extra heavy p ammo had brutal recoil in my Bisley Blackhawk, and I didn't even attempt to shoot it in my short-barreled Uberti. This 255gr Keith load felt like .38 Special in the Blackhawk and was stout but manageable (and grouped well) in the Uberti. I occasionally carry the Uberti since it is pretty concealable and from my experience this load is devastating on all sorts of targets. Highly recommended!
floyd noack on 04/11/2010 06:33am

wow wow wow. everyone at the gun range stoped to see what i was shooting. By far the hardest hitting round that will work in the judge. this will be my stock pile ammo from hear on. amazing stuff!