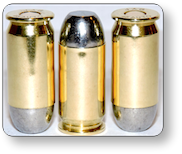 45ACP +P ammo is externally/dimensionally identical to 45 ACP ammo and can be fired in any 45 ACP firearm that is in normal operating condition. However, the greater pressures and power of the +P ammo will give you greater slide velocity and if you are going to shoot more than a box or two of +P ammo, you should consider replacing your recoil spring with a Wolf Spring that gives roughly 4 to 6 lbs more spring weight than factory stock springs. A shock buffer might also be a good addition although it is not too necessary if you use the stronger spring.

As always, with Buffalo Bore Ammunition, we use real world firearms to give real-world data and results. Laboratory test barrels tell you little about what kind of speed you can expect from your stock firearm.

All our 45 ACP+P loads utilize flash suppressed powders so that you will not be blinded by your own gunfire should you need to fire in the dark when the criminal element is at work. 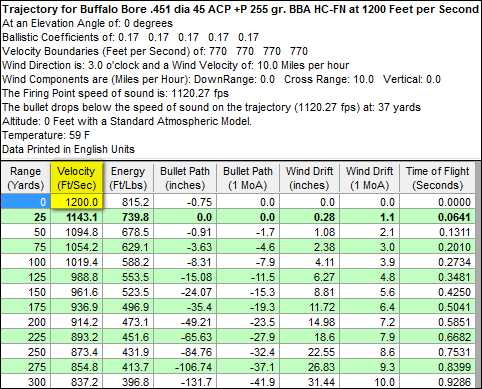 i have used 45 ball ammo to finished downed caribou on several occasions. i wasnt impressed. a couple days ago my son dropped a pretty large bull. as we got close it attempted to get back to its feet. my son shot it right behind the shoulder with this round and it just dropped flat. very impressive for a 45acp.
Frank Russo on 01/31/2018 08:36am

Best woods 45 ACP load you can buy. The 45 Colt is supposed to be more than enough for woods carry. It pushes a 255 grain bullet at 860 FPS. This BB 45 ACP round pushes the same bullet at 960 FPS. Plus it's hard-cast instead of soft lead, so it won't deform. It out-penetrated all other FMJ and FMJFP rounds I tested. It's also extremely accurate. I suggest an 18.5 lb. spring for best control in a full-sized 1911.
Awesome round.