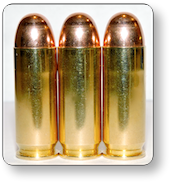 Due to repeated requests for a few 45 Win. Mag. loads, we are introducing the following load. It features an FMJ-round nose. 451 diameter bullet @ 1450 fps (actual velocity is 1444 fps) out of my single LAR Grizzly pistol.

We tested the original version of Winchester’s 230gr. FMJ Round Nose ammo and found that our test pistol gave 1389 FPS. Also, Cor Bon’s 230gr. FMJ Round Nose load gave 1385 fps, but both loads gave very high extreme deviations of around 70-80 fps. This generally happens in semi-auto pistols when the recoil or pressure of the fired round causes the breech face to open before the powder has sufficiently burned and thus the burn rate becomes altered by the opening breech and high extreme spreads in velocity result. Since new propellants now exist that did not exist 30+ years ago, we were able to engineer this current load that gives an incredibly low 22 fps extreme spread in velocity in our test pistol.

Not only were we able to engineer low extreme spreads into this new load, but we were able to push the same weight bullet, 60-70 fps faster than the original 230gr. FMJ-RN bullet and stay within industry pressure guidelines.

This new load is our recreation of the original Winchester load with an FMJ-RN bullet, but as stated earlier, at lower extreme spreads in velocity and at a higher velocity, all within industry established pressure guidelines. This is simply an enormous improvement over the original 45 Winchester Magnum ammunition.

This 45 W.M. load also fed/cycled reliably in our test pistol. It gave the necessary accuracy to hunt deer sized critters out to 75 yards, which means that self-defense on big critters @ less than 5 yards, is no issue. 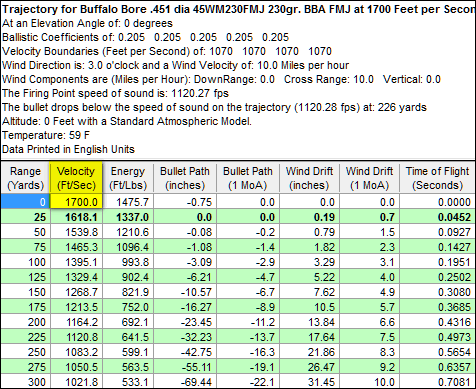