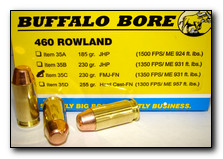 Again, as a result of popular demand, Buffalo Bore has added a new cartridge to its line—the .460 Rowland®.

The .460 Rowland®, as we load it, is squarely at mid 44 magnum power levels.  This means that a person can now carry a 1911 style combat pistol that has the power of a 44 mag. revolver, but is slimmer, faster to reload, faster to shoot and holds nine rounds instead of a revolver’s six.  The .460 Rowland® casing is simply a 45 ACP case that has been slightly lengthened so it won’t chamber in a 45 ACP chamber.  It also has a stronger web area in the casing, so as to avoid "blowouts".

To acquire .460 Rowland® test guns, I sent two of my 1911 45 acp pistols to Clark Custom Guns and had them install their .460 Rowland® conversion kits which at the time were being made by Johnny Rowland. To date the converted 1911’s work great. I can fire a 255gr. hard cast bullet @ 1300 fps or a 230gr. FMJ-FN bullet @ 1350 fps. What a great "woods" pistol that still maintains combat pistol qualities.

We are using flash suppressed powders in each .460 Rowland® load, so that if you have to shoot a bear or “bad guy” in the dark, the muzzle flash will not blind the shooter and we feel this feature is a big tactical advantage as most civilian shootings in America, occur in low light and we are willing to bet that most emergency wildlife shootings in the wilderness will be in low light too.

All current conversion kits being made to Johnny Rowland's specifications can now be found at www.460Rowland.com 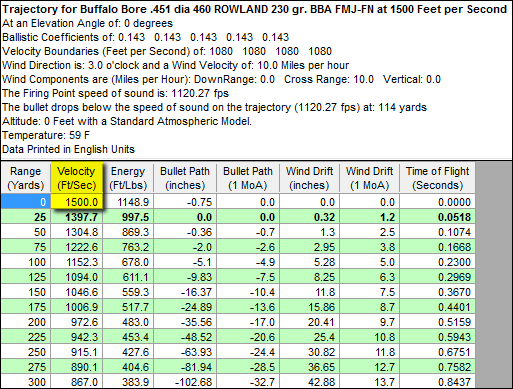