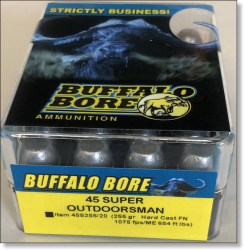 45 Super is externally/dimensionally identical to 45 ACP or 45 ACP +P and is designed to be used in 45 ACP semi-auto pistols that have been fitted with stronger than normal recoil springs and a shock buffer, plus a couple other modifications. While you can shoot 45 SUPER out of some stock 45 CP +P pistols such as the Glock 21, HK USP or the full-sized all steel 1911, you will batter your pistol if you do not have them modified to handle the extra pressure and slide velocity of the 45 Super.

All our 45 Super ammunition is loaded with flash suppressed powders so that if you have to fire in low light (when the criminal element is out) you will not be blinded by your own gunfire at the worst possible moment.

To learn about the modifications your 45 ACP pistol needs to reliably and safely fire 45 SUPER, contact Garey Hindman at 936-402-3484. Garey is the foremost authority on 45 Super modifications/conversions for your 45 acp and Garey performs such conversions for a living.

The below velocities were fired from my Colt Gold Cup Govt. Model (5-inch) that was converted by Garey.

As always with Buffalo Bore Ammunition, we use real world firearms to give you real-world data and results. 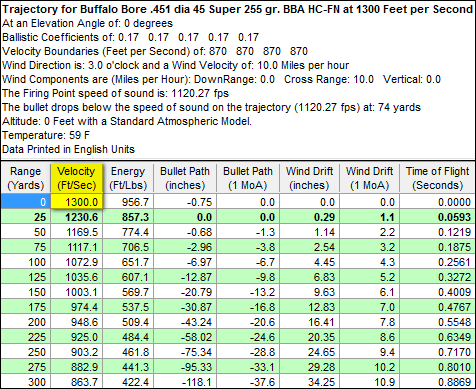 I bought this ammo in preparation for my trip to the Northwest, Canada and then Alaska. I could not drive through Canada with my 44 magnums because they were like 1/8" too short to legally drive through Canada with. So I took the advice I got from others and converted my G21 to shoot the super. All I did was buy a KKM barrel and switch out a 25lb spring from the 22lb spring I used for the P 45 Outdoorsman. I ran several magazines of the 45 Super Outdoorsman and the 45 Super FMJFN and I had no problems with either so I decided to go with the 45 Super Outdoorsman. This is by far the most powerful semi auto round I have fired or even heard of. This round is more powerful than regular 240 44 mag ammo out of my 4 inch barrel. I have Garrett Cartridges and a few of the other Buffalo Bore 44 mag loads and although the 45 Super is not as powerful as them, I feel just as confident using the G21 with the 45 Super Outdoorsman. I would rather have had my 44s, but after many practice iterations burning through about 7 rounds in 2 seconds, with 7 more rounds to spare, I was feeling confident. confident to just walk the trails and walk around with my dogs that is. not hunt or anything. I just wanted to be able to give myself a chance if anything happened. Don't let anyone tell you that you won't have a chance with this 45 Super. I stopped quite a bit on my way up to Prudhoe Bay on the Dalton, but I never went into any deep remote areas with limited visibility due to brush. One time I stopped and was going to let the dogs out and the dogs went nuts for some reason. They are APBTs and rarely ever bark or growl and they never got that riled up and never have till this day. I had one leg out of the truck and pulled it back in and drove off, 100 yards down the road there was a huge Grizzly chilling out. and that was the extent of my Grizzly encounters. Skunks have always been my #1 Arch Enemy!!
Jimmy Ragano on 01/11/2015 09:18pm

With a 23lb recoil spring in my Springfield 1911, the recoil of this round was that of a lite recoiling 10mm. It was easily the most accurate .45 caliber bullet I've ever shot with point of aim being exactly the point of impact at 25 yards. This is my go to round when Kayak fishing with black bears, boars, and two legged creeps around.
stan on 09/03/2011 09:28pm

Shot it out of my glock 21sf with lwd 6in barrel and ismi 22lb spring, stainless guide rod.
Recoil increase is 30%, measurable increase in muzzle noise, over 50% increase in downrange performance.
It recoils like a hot 357 mag, but hits targets like a 44 mag.
Seriously considering it as a primary hunting handgun.

here's a video of me shooting it: http://www.youtube.com/watch?v=mvYpGKBfVfQ