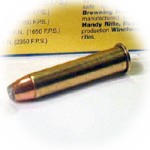 Never use this ammo in original or reproduced "Trap Door" action as the design is far too weak. 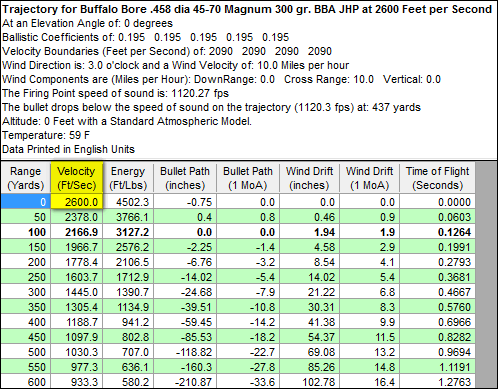 The absolute best high pressure load manufacturer in the business. The 8E load does well for me; it is fast, accurate and is a perfect match for my Henry .45-70 H010. Four rounds at 75 yards within 1.5 inches using my Vortex rifle scope mounted on a picatinny rail (Marlin 336 type); in which my drilled and tapped receiver was ready for regarding such an application. I have other 8x loads I will try; just haven't gotten around to them yet. If you want the best; it is worth every penny for these rounds from a elite manufacturer.
Danny Cantrelle on 11/16/2019 08:19am

Update from my last review on these rounds in January of 2018. I shot these rounds through a chronograph about a week ago. I was shocked at the numbers.! They produced 2,493 FPS average out of my ultra Hunter handi rifle with 24" ss heavy barrel scoped with 3x9x40 slug hunter Nikon. That is so fast for 45-70 ammo !!! Superior product from buffalo bore

I use this round on deer in va it is devastating head on chest shot turned all intels to mush. Good black bear round too.
Cheech on 12/09/2018 06:47pm

Hello, buffalo bore comrades. I wrote a review back in 2011 on 405jfn, which is still posted. Since then I switched to the 300gr jacked hollow point. Well, this ammo shoots 1/4" groups at 50yds out of my handi rifle with a 24" stainless barrel and receiver, and thumb hole in the stock. These groups are unreal for big bore ammo. This is a credit to the precision and consistency in which the staff at Buffalo Bore produce their ammo. Well as per performance, a few weeks ago I had 1st opportunity to use those 300gr jacked hollow points on a whitetail deer. I was 35 feet up in my summit climber hunting in Mississippi, and a deer showed up right before dark at about 30yds, I put the hammer down, the deer laid down as soon the hammer dropped! !.didnt realize that when I shot I blasted a limb off about the size of large man's thumb, and the 300gr still hit its target. A week later I took an 80yd shot on a good bodied 7pt buck. I was was in a box stand elevated on a hill. When I shot he stumbled then made his way off the food plot. Found the blood trail, massive blood trail he only went about 25 yds, it was a KO! Both deer had about quarter size entry and exit, but when I rolled back the hide, there was fist-size damage throughout!!. The fact is, when I'm in my stand, I'm am so confident and in command with Buffalo Bore Ammo, I would never consider using any other ammo!!
Todd maestretti on 01/10/2015 08:01pm

Been using for the last 6-7 years on whitetails with excellent results in my 1895 guide as well as pedersoli double rifle
Just made the switch to a scope on the marlin due to old eyes and looking forward to seeing groups and range i can squeeze out of this ammo
Alan M on 11/17/2014 09:24am

Ruger #1 African, Found the recoil to be mild for the amount of energy the round produces. Very accurate. Four large Russian Boars, one buff, six deer, all one shot animals. Very good round. Highly recommend it. Will give it a workout in Africa next year.
Eddie Martin on 11/07/2010 06:01pm

In October of 08' I first tried these rounds. I was first impressed with the accuracy at the range and even more so with the two whitetails I took in the first weekend. Both were outside of 100 yards and didn't take a step.