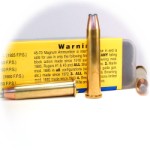 Never use this ammo in ANY original or reproduced "Trap Door" action as the design is far too weak. 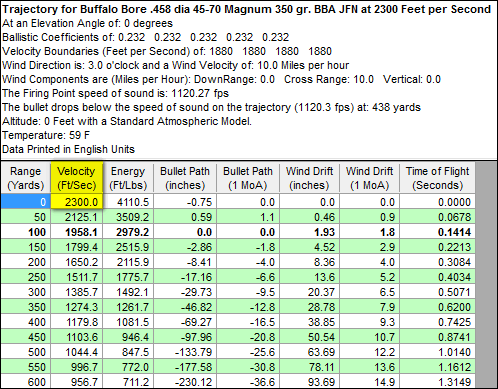 I purchased your ammo (350 gr. 45-70) from Cabela's and then checked out your website after getting it off the box.

My bear scaled at 451 lbs. field dressed with approx. live weight of 500 lbs. The dogs had it bayed up in these open hardwoods. I took my shot from about 50 yards and put him right down. Once again, thanks for a super product. Your ammo is top shelf.

To all at Buffalo Bore
I used your 45-70 buffalo bore 350-grain bullet and took this buffalo at 75 yards - blowing out both lungs and exiting the other side with a 3/4" size hole. I dropped him immediately with one shot. Because of the awesome knockdown power and accuracy of your ammunition, I will not use any other kind from now on.
Just thought you would like to know how I feel about your product.
Thanks,
Craig Lowe
Florissant, CO

Hello, my name is Jimmy Elixson and I just want to say thanks for your 45-70 p loads. I shot a 427lb black bear just a few weeks ago, with your 350 gr. bullet and wow! I made a straight on shot at about 4 feet in the head and the bullet went in under the left eye and went thru the head and all the way down be side the back back bone and I dug the bullet out of the back left ham. My bear was 5 feet 3 inches from nose to tail on it side laying down and your bullet was about 3 inches from making a complete pass thru on that bear.

I have hunted black bears a long time and this is by far the best ammo my buddies and I have ever seen. I bought ammo back in late November just to try something new and I'm glad I did. And I love how it shoots in my Marlin guide gun. I'll be a customer of yours for many more hunting seasons to come. Oh, I almost forgot to mention, I weighed the bullet when I pulled it out and it still weighed 337 grains. Once again thanks.

Recoil is stiff. But its what you wouldd expect for such a deep penetrating as well as super accurate outta my guide gun. Big bears here in PA. So this is a crossover to whitetail with our overlapping seasons. Not to much damage on whitetails. Clean exit,little meat damage. But still has the sauce for a 5-700 pound black bear.
B Pearch on 08/29/2011 12:30pm

I've used this ammo in a Marlin Guide Gun for the past 4 years (350 gr. JFN) on moose. It typically groups around an inch off the bench preseason.
Moose have been taken broadside from 50 feet to 150 yards. Have been able to recover 2 bullets, both just under the hide on the far side of the bull. Very little meat damage, and the moose have not gone more than a step or two before hitting the ground.
Just be ready, it will thump you on the bench but you'll never notice the recoil in the bush.
william Brooks on 10/27/2010 12:20pm

This 350gr .45-70 worked perfect on my first Elk Hunt. Shot a trotting elk at just under 100 yards with an 1886 Extra lite. Bullet crushed through a rib on impact and exited out the shoulder after passing through both lungs. The critter died so fast it was already on the ground and out of sight when I recovered from the recoil. Exit wound was smaller than the entry wound; very little loss of meat. The cartridge performed perfectly.
C. Smith on 08/12/2009 08:10am

I used this ammo on a bison hunt. Two shots one complete pass through one in offside skin. They performed just as they should. Chronographed in my 28" barrel at an average of 2304fps. The recoil is not for the faint of heart but ammo perfoms flawlessly.
G. Vincent on 04/01/2009 09:02pm

I hunt black bear in Montana with a Marlin 1895 chambered in .45-70 Govt. In addition to black bear, the area that I hunt is also occupied by grizzly and mountain lion. My ammo of choice is the Buffalo Bore 350 gr. JFN. Although the recoil is fairly significant especially when shooting off of a bench rest, it is very reassuring knowing that my ammo is both accurate and effective.