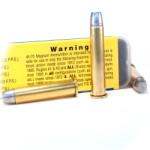 All Marlin 1895 (1895 Marlins are all model 336 actions, chambered in 45-70) iterations made since 1972, all Browning 1885 and 1886 copies, Rossi Rio Grande, New England Arms Handi Rifle, T/C Encore, ALL falling block actions made of modern steel such as Ruger #1 and #3, Shiloh, Christian and Pedersoli Sharps, Henry Lever Action Rifles, CVA Center Fire Rifles, all Winchester 1886 iterations made since 1915, CVA Centerfire Rifles and all Siamese Mauser bolt actions.

Never use this ammo in ANY original or reproduced "Trap Door" action as the design is far too weak. 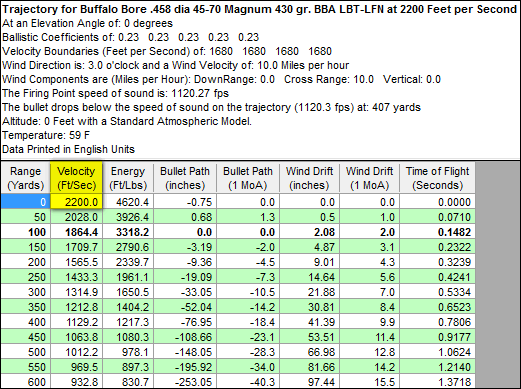 Included is a picture of an excellent specimen of a Nunivak Island (Alaska) Musk Ox that I took during the spring hunt this past February 2007. The animal was hit with a single through and through traditional lung shot at approximately 75 yards (by GPS) and expired in less than a minute; moving only a dozen or so yards after being struck. The Wild West Guns Master Guide conversion on my stainless steel Marlin Guide Gun performed perfectly with your mighty Buffalo Bore 430gr L.F.N. - G.C. .45-70 ammunition. During the wet, frigid hunt, I did not have the slightest problem with my converted Marlin rifle or your marvelous ammunition. Extensive practice with your ammunition in Fairbanks, AK, in temperatures as low as -30 degrees Fahrenheit before the hunt gave me the greatest confidence your product would not fail me during the moment of truth. Thank you for giving me the "power" to complete such a wonderful adventure.

Dear Buffalo Bore, As you recommended, I used your 430 grain 45-70 magnum cartridges in my Marlin 1895GS lever action for a bison hunt in Missouri. In short, I couldn't be more pleased with the results. After stalking for a couple of hours, I moved along a riverbed and had a 75 yard shot at a 3-year old 800lb bull I was after. I hit the bull exactly where I wanted with the open sights: behind the shoulder and the bullet drove right through the middle of the opposite shoulder and into the hillside. The bull took one step and immediately dropped. No follow-up shot was necessary. When I went up to the kill, a very large bull came out of the nearby woods and threatened to charge. I had another three rounds of your ammo loaded and was very comfortable as I was confident I would be able to drop him if he decided to charge. This was an extremely humane hunt due to your accurate and powerful round -- the great bison didn't know what hit him and expired in a few seconds. From my calculations, your round has over 3.65 Newton-seconds of momentum (extremely high) and very high penetration -- the perfect combination for any bison or similar game. I won't hesitate to use your ammunition again. I've attached a picture. Sincerely, Steve 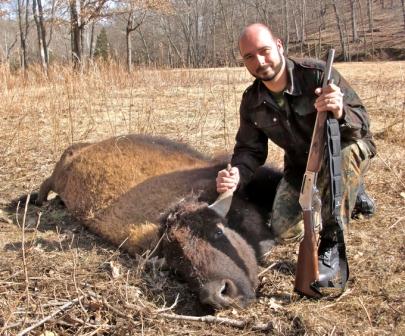 I want to personally thank you for helping us on this hunt! We had a amazing time, and it is support from companies like Buffalo Bore Ammunition that make these hunts successful. The ammo performed exactly as you said it would. No issues taking down young to mature bulls.

This trip was special as four of the veterans were combat veteran 11B's (Army infantry) and myself, a Marine infantry man. Everyone on this hunt was disabled and all disabilities were combat related. It was very comforting knowing that the ammunition in my rifle was accurate, hit like a freight train, and was American made. Thank you so much.

Thanks for making the Ammo you do. Before taking the plunge to buy that shiny Grand Cherokee outside I was able to pull off 5 solo hikes in the Eastern end of the Brooks Range. Having a 45-70 full of your 430gr thumpers made me (and my family) feel a lot safer.
Stephen McKelvain on 02/15/2010 02:09pm

Attached is a picture of the 44" buffalo taken in the Okavango Delta, Botswana. I used the Buffalo Bore ammo that you sent and recommended. 430 gr. LBT-LFN

The bullet performed perfectly. It was a one-shot kill straight into the heart with a quartering-on angle. Both my Professional Hunter and Mark Keefe, Editor of American Rifleman were concerned about what the performance would be of a single-shot rifle chambered in .45-70. Needless to say they were both very impressed with your cartridge.

The hunt will be on "Benelli On Assignment" on the Outdoor Channel in 3rd quarter 2010. It should also be written up in American Rifleman by Mark and possible by another writer that was on the hunt named Bob Williams. He writes for Sporting Classics among others.

Thanks again for the ammo and your advice. Having taken animals from a Steinbok to a Cape Buffalo with .45-70 Buffalo Bore ammo I feel totally confident with the performance of your ammunition.

Please feel free to use the photos on your website if you wish.