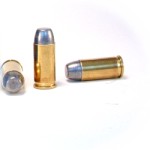 The 32 ACP auto inhabits a valuable and useful place in our society as a defensive cartridge, mostly because of the easily concealable, tiny pistols chambered for it. , because of the very limited size of the cartridge, it is plagued with limited power and therefore most of the existing ammo in 32 ACP suffers from not being reliable as a man-stopper. We've studied and examined nearly all available 32 ammo and find it wanting as a reliable means of self-defense, especially against a large, drugged up/, determined attacker.

The current 32 ACP frangible ammo delivers a large amount of surface trauma but lacks sufficient penetration. For example, if you shot me or another sane man in the face, with modern, frangible 32 ACP ammo, it would blow off a big portion of my cheek. I would undoubtedly fall to the ground in shock and pain, but I would be very much alive and functional if I could get past the pain, as that frangible bullet would have stopped somewhere in my face, never making it to my brain. However, if you shot a drugged up maniac in the face with that same frangible bullet and blew half his cheek off, he would keep right on coming because he is insane and is not thinking like you or I. Plus, he is likely pain free and fear free and won't know that part of his cheek is missing and if he did know, he would not care. So, whatever 32 ACP ammo you shoot him in the face with, had better go through his face and blow his brain stem out the back of his head because only a CNS (central nervous system) hit with a 32 ACP is going to stop him. Likewise, a torso hit to the sternum needs to penetrate deep enough to blow all the way through his spine in order to shut him down instantly. If you fail to shut him down instantly, you and your loved ones are going to have to find a way to survive while you wait for him to bleed out and pass out. The best chance of survival for you and your loved ones is to shut down the attacker instantly. So, we've designed this 32 ACP+P load to keep you and yours alive under the worst of scenarios.

Item 30A/20 is a 75gr. HARD cast bullet with a flat nose. It is traveling over 1,000 fps out of my 3.4 inch Beretta Mod. 70. We've used a flash suppressed powder so that you won't be blinded by your own gunfire in the dark. This is significant as well over 90% of all civilian shootings in America occur in low light when the criminal element is out and about. Also, this flat nosed, nonexpanding, hard cast, bullet will penetrate deeply and will do much more damage than the typical round nosed FMJ bullet. Round nosed bullets tend to slip and slide through living tissue, doing little damage as opposed to a flat nosed bullet. The flat nose not only wounds much more than a round nosed bullet, but it actually keeps the penetration straight and thus deeper. Notice the below velocities from my personal 32 ACP pistols. These are real-world guns and thus the speeds are realistic and not the exaggerated speeds you'll see produced from laboratory test barrels. What you see with Buffalo Bore Ammo advertising, is truly what you get in the "real world" where it matters. You can expect 20+ inches of straight-line penetration in flesh and bone with this load. If you are worried about over-penetration with this load, DON'T! You chose to carry a tiny under-powered 32 ACP pistol and the tradeoff is that now you are going to have to stay alive using this pistol and over-penetration will be the least of your worries if you end up needing this gun to save yourself or your family.

The above bullet speeds are 110 fps to 150 fps faster than the Winchester 71 gr. FMJ ammo on the American market. Not only is our bullet heavier than any other American made 32 ACP ammo, but it is moving about 15% to 20% faster - with that heavier bullet!  Feeding and function were flawless in the three test pistols listed above. 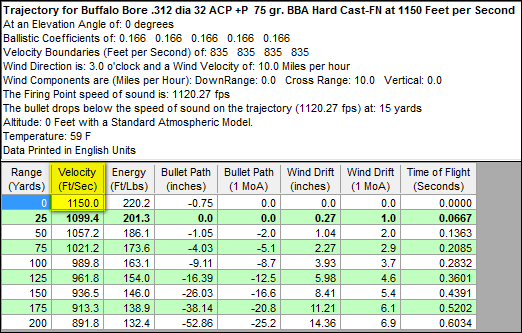 This hardcast .32 ammunition by Buffalo-Bore, really transforms my Colt M-1903 pocket pistol into a 'serious carry gun', when warm
weather precludes me from wearing a heavier-caliber handgun under more-concealable clothing. It's a very accurate and powerful load with a flat nosed bullet which will penetrate any amount of normal clothing to reach vital organs, and that 'flat nose' ensures maximum energy transfer for this sub-caliber, especially when compared to traditional .32 Auto' 'ball' and traditional hollow-points, as offered by a few of the domestic manufacturers.
Paul Lennon on 04/21/2021 09:30am

Since first available, I have used this BB .32 ACP P (75 gr.) load in my Colt M-1903 pistol in .32 ACP and it feeds flawlessly and adds an unsurpassed dimension of power to this small caliber pistol. It also shoots to the same point-of-impact as the standard loads, that I use for practice. (I now need to purchase MORE of this load as soon as it is available again in 2021!)

Good stuff, more accurate than other brands I've shot. Just make sure you or preferably your gunsmith rig your magazine with a flyerwire to prevent rimlock. Happened to me a few times on the Kel Tec P32. My gunsmith pointed out that the vertical magazine column is really bad for rimlock, better an angled feeding system.

I bought my wife a sub compact 9mm for concealed carry. She thought it was still too heavy and seldom carried it so I reluctantly bought a smaller pistol in .32 ACP. I figured that it would be better for her to carry a .32 all the time instead of the more powerful 9mm some of the time. Now that I ran across this load from Buffalo Bore, I feel more confident that my wife will get the most out of the little .32. I feel that this load is far superior than any other .32 ammo out there. Buffalo Bore did a great job researching and developing this load as they do with all there ammo.
John M Howerton on 04/25/2009 05:50pm

My little 1938 Walther PP is not such a peep squeak mouse gun anymore.. thanx to this load from BuffaloBore. Functions 100%. Groups 9rds into 2in or less at 25yds. Used black tape and taped two, big, 6in thick phone books togather tightly.. and at 15 yds the little 75gr hardcast bullets went clean through. Superior product and service. Best performance available for .32ACP. 220lbs of energy is .38Special territory. BuffaloBore is King. JMH