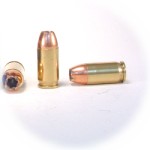 The 380 auto inhabits a valuable and useful place in our society, mostly because of the easily concealable, tiny pistols chambered for it. HOWEVER, because of the insufficient size of the cartridge, it is plagued with limited power and therefore most of the existing ammo in 380 auto suffers from not being reliable as a man-stopper. We've studied and played with nearly all of the existing available 380 ammo and find it wanting as a reliable means of self-defense, especially against a large, insane, drugged up/pain-free, determined attacker.

The current 380 auto frangible ammo delivers a large amount of surface trauma but lacks serious penetration. For example, if you shot me or another sane man in the face with modern frangible 380 ammo, it would blow off a big portion of my cheek and send a few teeth down my throat, I would undoubtedly fall to the ground in shock and pain, but I would be very much alive and functional if I could get past the shock and suffering as that frangible bullet would have stopped somewhere inside my face, never making it to my brain. However, if you shot a drugged up maniac in the face with that same frangible 380 ammo and blew half his cheek off, he would keep right on coming because he is insane and is not thinking like you or I. Plus, he is likely pain free and fear free and won't know that half his cheek is missing and if he did know, he would not care. So whatever 380 ammo you shoot him in the face with, had better go through his face and blow his brain stem out the back of his head, because only a CNS (central nervous system) hit with a 380 is going to stop him. Likewise, a torso hit to the sternum needs to penetrate deep enough to blow all the way through his spine to shut him down spontaneously. If you fail to shut him down instantly, you and your loved ones are going to have to find a way to survive while you wait for him to bleed out and pass out. The best chance of survival for you and your family is to shut down the attacker instantly. So, we've designed a few 380 auto +P loads to keep you and your loved ones alive under the worst of scenarios.

This 380 Auto+P ammo will better all American made 380 Auto ammo by 150 fps to 200 fps in all bullet weights we make. This is a serious improvement in this typically anemic cartridge. This 380 auto+P ammo is stronger than the standard 38SPL ammo made by most American ammo makers, and you'll get seven shots of it in a small/flat/lightweight 380 versus five shots out of a bulkier 38 SPL J frame revolver. Additionally, with the 380 you'll get much faster reloads, and the little magazines are flatter than a speed-loader used for a J frame.

Item 27C/20 is a 90gr. Jacketed Hollow Point bullet.  It is traveling over 1,200 fps out of my BDA (Browning Double Action) with its 3.75-inch barrel. We've utilized the very same flash suppressed powders that we've used in our two other 380 auto +P loads. If you like the idea of the extra big hole this expanding load makes in human flesh, we would advise that you load this bullet in your chamber, followed by a magazine full of our non-expanding loads. So, if the first shot does not incapacitate the attacker, your magazine is full of ammo that will, if you can put the bullet in his spine or brain from any angle.  Note my "real world" velocities from my personal "real world" pistols. 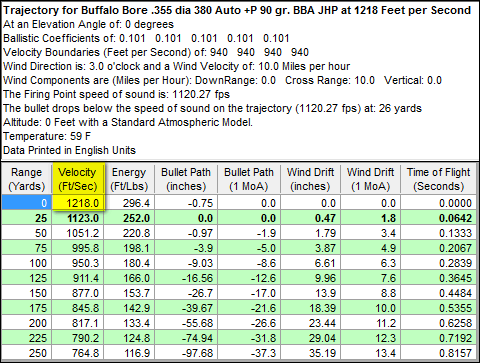 Hello,
I ran a magazine full of these cartridges through a Taurus TCP 380 today for the first time.
Before doing so, I changed out the stock 10 lb recoil spring with a 12 lb set, along with a stainless steel guide rod.
Was sure glad I beefed up the recoil spring!
These babys are hot!.and I'm so glad for that!
Thanks, Buffalo Bore! Another fine product!
John H. on 10/24/2019 08:13pm

This is my ammo of choice in my Colt Pony Pocketlite for EDC. I get over 1,100 fps from the Colt's short barrel. This round and BB 100 gr. hardcast are the only reason I haven't moved up to a micro sized 9mm from my .380. The difference in power isn't enough to justify buying a new carry gun that would be slightly larger!
RidgeRunner on 10/24/2019 05:51pm

Snappy's not the word for it. But this isn't for plinking fun, it's designed to get the job done. it will. I wounded a whitetail doe while bowhunting that was terminal but suffering. Pulled out my S&W Bodyguard that I had tucked in my jacket, placed it on the doe's head, lights out. Immediately. I feel very confident when carrying my .380 that this round will stop any close-quarters threat.
Mike on 09/29/2015 07:27pm

I fired a few of these through my Walther PK380, and my Kahr .380. They ran flawlessly and were very accurate. The recoil is very manageable-but noticeably more pronounced!

Simply outstanding out of our Beretta 84s'. Incredible accuracy, hard hitting, we favor the 90 grain JHPs for self defense, winter,summer. Just plain excellent, our velocities are slightly higher, don't know why, but we are NOT complaining! we did up to Wolff XP recoil springs,just for these rounds, well worth it too.
Tim Hoffman on 10/18/2010 11:51am

I just shot a few clips of your .380 100 FNHC round. I I shot each bullet into a block of solid pine wood that was about 8 inches thick. To my surprise your bullet penetrated almost 4 inches. Thats about an inch more then the 2 competing other bullets I performed the same test on.
The report and recoil took some getting used to but for my my defensive carry .380 I will use your ammo for maximum penetration through leather jackets and layers of denim
TH on 08/02/2010 09:32am

I was a little nervous about shooting these rounds from my ruger lcp, but I knew i had to practice with my carry rounds. These rounds are safe to fire in the LCP, but they do pack a huge punch in such a small package, and it's definitley a sharp recoil.
Lt.372 on 05/13/2010 08:53pm

Nice, little pricey but nice. Puts more than a little kick to the 380 Bersa I carry off duty.