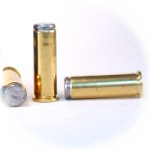 Due to customer demand, we've developed this defensive 38 SPL ammo. Our customers wanted some devastating 38 SPL loads that would fill the following criteria.

This load is flash suppressed, so firing it in the dark won't blind you. We use flash-suppressed powder in our defensive ammo in the loadings whenever possible as over 90% of all civilian shootings in America occur in low light when the criminal element is at work. We don't want you blinded by your own gunfire after the first shot.

Item 20D utilizes a very hard cast 150gr. WAD CUTTER bullet. The bullet is made hard, so it won't deform or mushroom. It cuts/crushes a "cookie cutter", full diameter hole in human flesh just like it does on a paper target. It penetrates deeply (roughly 14 to 16 inches in human tissue) and its full diameter profile maximizes blood loss as it cuts and crushes (not slips or slides) it's way through tissue. Although I've never been shot with a full profile wadcutter bullet, I must assume that the initial impact of that wide flat-nosed bullet is crushingly formidable. As a teenager, I took to the woods regularly and killed many a critter with heavily loaded 38SPL wadcutters'. The effect of a full profile wad cutter on small game was obvious and amazing compared to regular round-nosed bullets. That flat nose literally hammers living things. These bullets are hard and properly lubed and will NOT lead your barrel. Note my velocities from real-world "over-the-counter" revolvers - NOT TEST BARRELS! 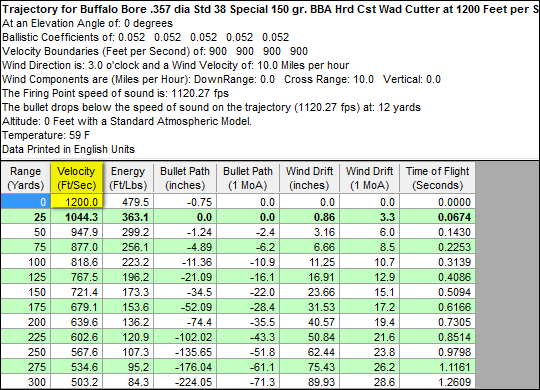 The felt recoil was not much more than some of my "target" wadcutters running around 600-700 fps.

I prefer this hard cast wadcutter over the many 38 special +P hollow points I've fired out of my full weight steel frame snubbies. Most +P hollow points fired out of a 1 7/8 or 2-inch snubby don't have the powder burn time before the bullet exits the bore to achieve the velocity needed to expand on impact. Most act much like a full metal jacket round remaining near fully formed on retrieval and examination. It is what it is.
jim Hiller on 12/28/2017 05:35pm

I use this load as my winter carry load . People here in Michigan wear multiple layers of heavy clothing in the winter and I'm confident of the 150gr wadcutter's ability to penetrate deeply enough to stop a fight. I carry it in a ported S&W mod 642 and it's comfortable to shoot and very accurate altough it doesn't shoot to POA of the revolver which I believe is regulated for 125 gr ammo.Very consistent and very high quality ammo. Thank you BB for your great quality. You are always my go to brand
Daniel Wilson on 05/29/2017 09:02pm

The only drawback of this .38 ammo, is that because of it's sharp edges, it's difficult to load fast from a speed loader. Other than this, it would be the "ONLY" .38 ammo I would use in my Smith and Wesson 637 Snubby. Very controllable out of an airweight J-Frame, I can group all five rounds in a 2.5 inch group at 10 yards with it, and I've no doubt it can deliver on the defensive end. I try to preach it's use to everyone with a Compact Revolver. Good stuff.
Justin Hern on 02/28/2017 04:50pm

Recently purchased some of this load to replace my dwindling supply of remington 158 p lswchp. The Remington load has always been my carry load, it chronographs at about 800 fps from my s&w 638 airweight. The buffalo bore wadcutter load averaged 863 fps out of the same gun and had the same perceived recoil. I recently used the wadcutter load to shoot a very large 'possum stealing eggs from my chicken house. The bullet enter the head just above the nose and exited the left hip of the 'possum the proceeded to bore a hole all the way through a 2x4 in the wall and came to rest in the ground outside. The recovered bullet looked as though it could be loaded and fired again. The 'possum was killed instantly. Although a 'possum is not an especially tough critter this account is a testament to the penetration of this load. This load shoots perfectly to the sights on my snub and will group a whole cylinder inside a beer cap at 7 yds. I'll be buying more. Thanks Buffalo bore keep'em coming.
Michael on 08/15/2011 05:02pm

I am somewhat skeptical of hollow point designs, even in today's market. I want a round that will perform flawlessly every time. I see hollow points fail to expand, which for me makes them guess work if they will work or not regardless of the probability they will (especially with older calibers such as 38 Special (lower velocity)). As a result, I try to find the best suitable non-expanding ammunition in the caliber in question. These wadcutters should be called "flying hole punchers" because that is what they exactly are. In my tests they out-penetrate every other 38 Special round (standard velocity) and leave a more devastating wound path. Self defense situations are fast, with these you don't need to worry about their hand/arm being in the way in order to put it into their ribcage.