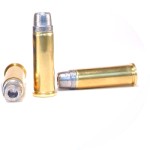 Due to customer demand, we've developed this defensive 38 SPL ammo. Our customers wanted some devastating 38 SPL loads that would fill the following criteria.

Buffalo Bore is introducing these three different heavy, yet standard pressure loadings for 38 SPL. These offerings are loaded at standard pressure, but they are much more powerful than normal 38SPL ammo. These loads will not harm older more fragile revolvers. So, these loads are safe for use in ANY 38 SPL revolver, provided it is in normal working condition. As stated above, the "POWER" level of these loads is really closer to a typical +P power level, but the pressure is standard. We are able to develop these powerful standard pressure loads with modern non-canister powders. Again, these loads recoil far less than our +P 38 SPL ammo.

All three of these loads are flash suppressed, so firing them in the dark won't blind you. We use flash suppressed powder in our defensive ammo, in the loadings we can, because over 90% of all civilian shootings in America occur in low light when the criminal element is at work. We don't want you blinded by your own gunfire after the first shot.

Item 20C utilizes the same 158gr. with a very soft lead cast, SWC-HC gas checked bullet, we load in our +P 38 SPL ammo. It is designed to expand and then penetrate quite deep. (Approx. 14 inches in human tissue) This bullet is gas checked and will NOT lead your barrel. Note the below velocities that I recorded out of my personal revolvers- NOT TEST BARRELS! 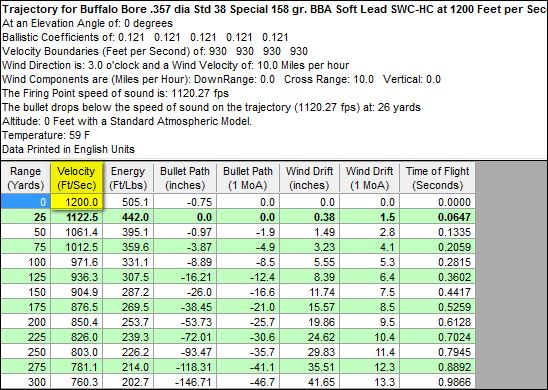 I picked up a new S&W Model 60 with a 3" barrel and wanted to see how well it shot the 158 gr LSWCHP standard pressure cartridge. I shot in single action mode because I wanted to see how well the round performed by eliminating my less than perfect double action technique. The result surprised me as I shot a three leaf clover at a distance of twenty-one feet.

I shot several other rounds today as well but none gave me the cloverleaf that I got from Buffalo Bore.

Excellent expansion on a "Paul Harrel meat target." One round expanded to 1.75",and the other to @1.6". Textbook expansion. This was on a four denim layer FBI type test, with a ham as the arm muscle. Complete penetration, and the rounds stop right at the layered backstop. I am very confident that my revolvers with this ammo will stop a threat without destroying my hearing, blinding me in the dark, and will not endanger any bystanders. Great website!
Seth Burgin on 04/14/2018 08:38pm

I got better velocity from a Colt Detective Special, than a J Frame Smith, but the Colt D frame locks up better than any other revolver, except a Russian Nagant. These are what I use in J Frames, but the high carbon steel Colt D Frames were sometimes reamed out to .357, and they could shoot .357 too, just not frequently.
Helga on 07/05/2017 11:00pm

I think something may have gone wrong with my previous review, so here is the corrected version.

I was comparing this "Standard Pressure Short Barrel Low Flash Heavy .38 Special Pistol and Handgun Ammo" to the Heavy 158 grain plus P.

"I fired this from my 2016 Taurus 2" snubnose for the first time in my life. The kick was laughable and almost nonexistent. The bullet mushroomed perfectly and stayed in one piece. I shot it into soaking wet phone books. It penetrated your standard large soaking wet phone books at about 2 feet away through 2 and one half of them (the standard size phone books).

The PLUS P 158 grain was incredibly violent to me. It made it into the fifth waterlogged phonebook, but only as the copper-colored back part of the bullet which separated (or fragmented) into a molten looking lead blob that stopped in the 3 and one half phonebook range."
G. Stanley on 03/07/2017 12:56am

This Is a follow up review to my initial one. The ammunition still fires as well as ever even in the moist snowy Jemez mountains of northwest central NM. Never stop making great ammo and being a real asset to this free nation BB.
W Pope on 02/17/2017 11:26am

Buffalo Bore ammo is the ONLY thing I will carry while hiking in the Alaskan widerness. I use the LSWC in my .38 and even the full WC for max penetraion. Great product!