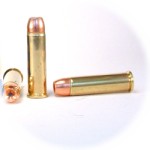 Typical full power 357 magnum loads offer several tactical problems for use in self-defense and duty applications, especially when used in the shorter/lighter revolvers that are typical of concealed, defensive and duty carry. First, the muzzle flash can be blinding, especially from short barrels. Second, felt recoil can be a life-threatening drawback if fast follow-up shots are required. Third, the level of the report can be deafening and cause permanent hearing loss, especially if fired indoors.

All three Buffalo Bore Tactical Short Barrel loads address the above problems and make the 357 magnum ideal for concealed, defensive and duty-carry in smaller revolvers.

These exciting new 357 magnum loads utilize a flash suppressed powder that will not blind you, should you need to drop the hammer in a low light situation. It is estimated that over 90% of all defensive civilian shootings in the U.S. happen in low light-that is when the criminal element is at work. Wouldn't it be horrible if you fired at an assailant, in the dark, to protect your family, only to find that you missed the bad guy and you are now blind due to your own muzzle flash? This is a scenario that has happened many times in the real world with the 357 Magnum. Through the use of our non-canister, flash suppressed powder, the tactical problem of blinding muzzle flash is now greatly reduced with Buffalo Bore's new Tactical Short Barrel loads!

Felt recoil is exacerbated by the use of shorter barreled, smaller framed, lighter weight 357 revolvers, typically used for concealed and duty-carry. The new Buffalo Bore Tactical Short Barrel 357 loads are not the normal full power "barn burner", 357 magnum loads we make and as such, felt-recoil is substantially reduced, although they remain very powerful. Hence, deadly, and faster follow-up shots are more possible.

Most folks don't think of the level of "report" as being a problem during a life-threatening/defensive shooting and that may be correct for the actual moment of conflict. However, to lose some of your hearing for the rest of your life, following the shooting incident, is unnecessary and undesirable. Full power 357 Magnum ammunition is deafening, even more so when fired from short barrels and even worse if you are required to shoot from an enclosed area such as a vehicle or indoors. Buffalo Bore's Tactical Short Barrel 357 magnum loads are not as hard on your hearing as full power ammunition. Although the use of hearing protection is still desirable, if possible when using this ammo.

For those who wish to carry a 357 magnum revolver for potential "conflict resolution", these new Buffalo Bore loads put an end to the "tactical" drawbacks associated with our regular 357 magnum ammo. These loads are great for use in longer barreled firearms too.

The below velocities were obtained from my personal, real world, factory stock, over the counter, (NOT TEST BARRELS) 357 magnum, revolvers. Also, note that the 6 inch Python, is considerably slower than the 4 inch S&W. This has nothing to do with barrel length. It is most likely a combination of differences in chamber/throat dimensions, barrel -cylinder gap, barrel internals, and forcing cone dimensions in the Python, versus the S&W. If the Python and the S&W had the same dimensions in their chamber/throats, barrel cylinder gap and forcing cone, the longer barreled Python would give much faster speeds. We have found that all of our Python test revolvers are much slower than our late model S&W revolvers of equal or even shorter barrel length.

We could have reduced the recoil, flash and blast even more by "watering down" these loads further than we did, but then you wouldn't have a real 357 magnum in your hands. So we looked for and found a balance between very powerful, fight stopping ammo that recoils and flashes much less than ours and some other makers, full power 357 loads. If we were to "water down" this "Tactical Short Barrel" 357 ammo anymore, we would simply not manufacture it and suggest that you use our 38 SPL+P ammunition.

None of these loads caused crimp/bullet jump (in five shots) in my 12 OZ. Scandium S&W Model 340, but they did generate considerable felt recoil.

Jacketed Hollow Point, bullet @ 1,100fps from a 2.5-inch barrel. It is designed to mushroom, yet hold together and penetrate deeply-roughly 13 to 15 inches in human tissue.

WARNING - Shooting this ammo out of revolvers weighing less than 16 OZ produces tremendous felt recoil. We recommend our +P 38 SPL ammo for revolvers that weigh less than 16 OZ. if you are recoil sensitive.  Click on the links below to see our 38 SPL +P offerings: 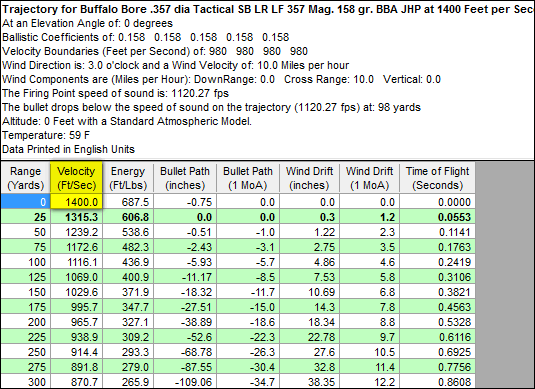 I just noticed that a previous review got destroyed in cyber space. So here's another. While hardly scientific, it still gives a basis of comparison. Buffalo Bore short-barreled ammo is top performer in my 357 snubbie.

I recently ran a comparison test of this round against the BB Heavy .357 mag (158 gr) and the BB .38 spl P.
The test gun was a ruger lcr.
Surprizingly, all shot to within 80 fps of each other. The Tactical Short Barrel round does seem to be truly optimized to a short barrel. I was surpized that it is actually faster than the "Heavy" stuff out of the same gun. Nice round, I'd like to see if we could push it a little farther though. Here's a link to my test.
http://youtu.be/kHkcevHvd6A